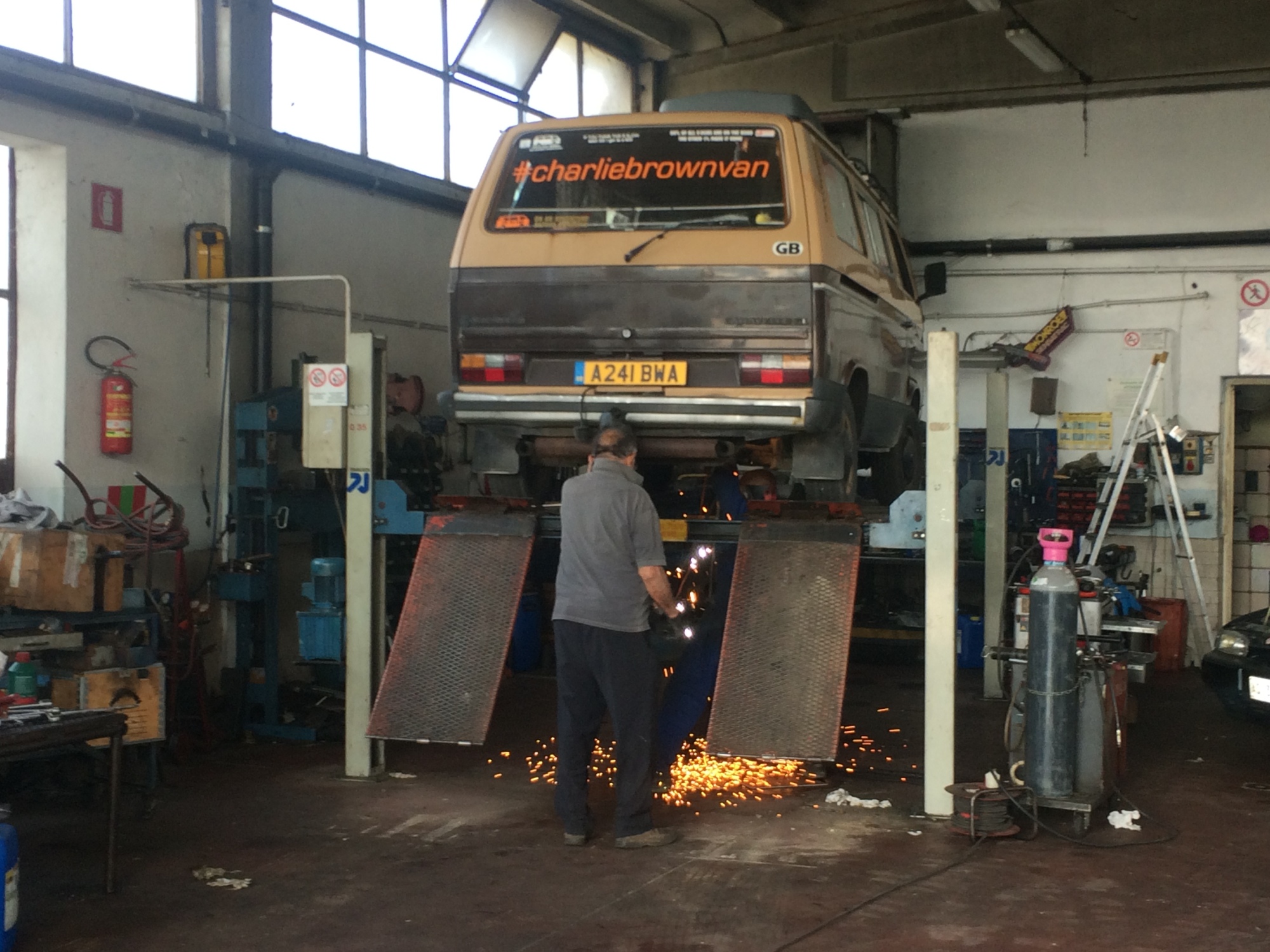 Pretty good spot for some lunch 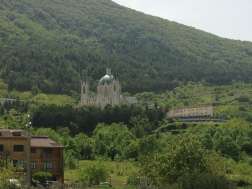 Views from the van window

Views from the van window

Turns out our plan of a cautious drive to Marck’s to collect the parts didn’t work. After a night in a train station carpark in Lucera, lunch at a beautiful layby in a valley and a stunning; slightly nerve wracking, slow drive we reached L’Aquila…. and then we got stuck in reverse.

All we could do was go backwards.

Luckily this happened whilst we were trying to park up for the night in a free camperstop  – so things could’ve been alot worse(every cloud!).After many attempts Tris managed to free the gearstick out of reverse and although it was possible to go through all the gears on the gear stick on starting the van up we found it was still in reverse gear  *sigh*. 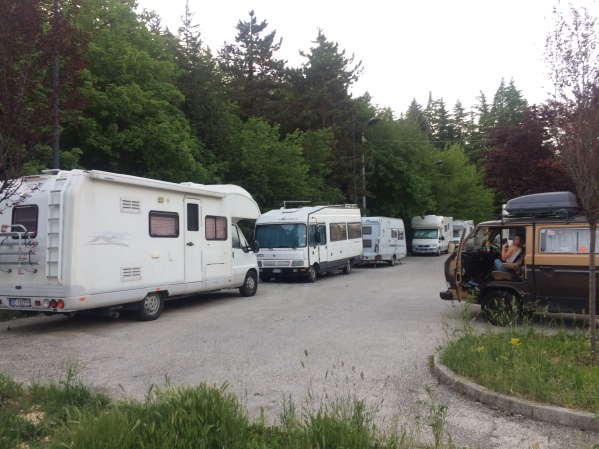 With no luck of moving forward we parked the van and comforted ourselves with a beasty; and possibly the best ever, steak sandwich and obviously got through quite a bit of red wine… 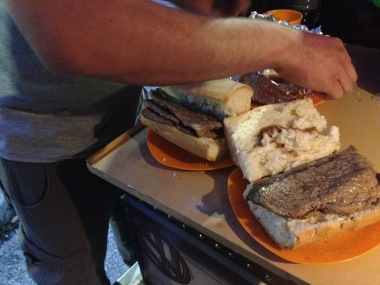 Sun was out the next day so that was a positive start! Tris spent all day under the van whilst Zo done her best to help by sitting in the drivers seat attempting to move the gears about(in between lazing in the sun 😉 )… No luck in fixing the overall problem but Tris got the van out of reverse!

Had a tapas style lunch to try and get rid of bits in our fridge (it only works when the vans rolling… ) whilst looking at some of the ideas people had come up with since we posted a new cry for help!  Marck had told us he’d keep an eye out for any other parts that might be of use as well as asking around about the problem.

Day 2 of being stuck and things had gone from bad to worse. Following up on a post and a couple of phone calls to Marck for advice, Tris noticed that there was play on the splines between the relay lever and the shaft that comes out of the side of the gearbox… after another call to Marck it was confirmed that there shouldn’t be any play whatsoever and that this could quite possibly be the reason for the relay lever/ball to keep jumping out of the selector cup,  If they’d worn up on the gear lever it was only a matter of replacing it… but on inspection we found that ours had unfortunately worn on the shaft, (“worn” would be putting it lightly…) Meaning it could be a gearbox out job and probably the majority of our money to be spent on it…

This lead to some more red wine and a solar shower which amused many passers by! We heard some good news later on – Marck had met a “VW T25 gearbox expert” who suggested welding the parts in place. He’d tried it before on his own vehicles and claimed it sorted the problem so we didn’t really have anything to lose!

Now, we had tried in every country to speak the basics of each language but when it came to explaining this issue we didn’t even know where to start…! Luckily Marck spoke the language fluently (he’d moved over to Italy from England a while back and was now an english teacher for Italians!). He kindly offered to ring around a few mechanics within a close radius to us the next day to explain the problem and hopefully book us in. We knew we could get the van into second gear so it was just a case of finding somewhere close enough that we could crawl too!

It only came to us when we got to the square that this town must have been greatly affected by the earthquakes last year. On the outskirts of the town  we just assumed a lot of work was being carried out but walking further in it was clear that this wasn’t just a renovation project. It was heartbreaking and eerie; especially at night, walking around the town seeing all of the structures being held up by different supports. You could imagine what it looked like before the horrific event occurred. 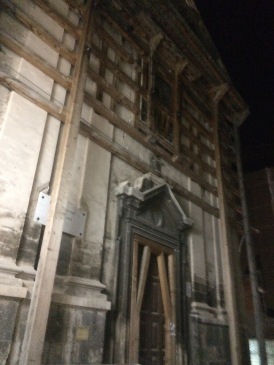 On a positive note, some businesses were open,some buildings were standing on their own again and amongst other people we visited an ice cream shop and sat in the square taking it all in.

Day 3 of L’Aquila involved us hearing that Marck had found a mechanic who could fit us in the next day (lifesaver!).Spent the day in the sun, went for a walk to try and find the garage (about 4km from where we’d parked – wanted to know where it was seeing as we only had 2nd gear and no reverse and thought it’d avoid any issues if we knew where we were going, 3 point turns are difficult without reverse gear…)- unsuccessful but managed to get caught in a rainstorm instead! We had a vague idea anyway but both our phones died whilst out so couldn’t double check. Rain was set in for the rest of the day so sat in the van, played a few card games and went to bed as we wanted to be up at the crack of dawn.

Day 4 of L’Aquila started at 5:30am where we drove incredibly slow with the hazards on in second gear! Drove to where the co-ordinates took us and no garage in sight… luckily a cleaner of one of the industrial buildings had also started early! She knew exactly where we were trying to go and  pointed us in the right direction. Gates not open yet we decided to park in the car wash carpark next door to wait ’til they opened and to have a cuppa.

We were greeted with friendly smiles when we drove into the garage… think they knew what was going on as soon as they saw the van. We got Marck on the phone (sorry we woke you up!) to liaise with the mechanic to confirm everything before poor Charlie got put on the ramps… 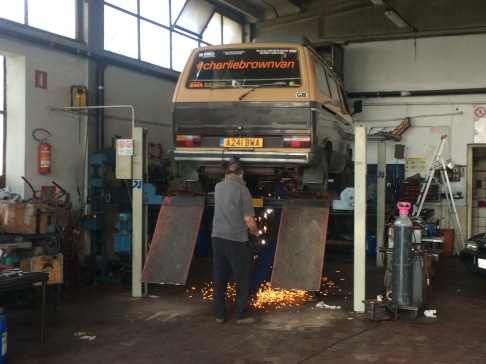 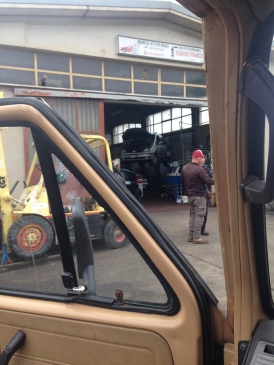 Us two patiently watched as the father and son team worked on the van and Tris then test drove it to make sure the weld was in the right place. He came back with a thumbs up and the two guys done some final adjustments before handing Charlie back to us. Done an amazing job and only cost a fraction of what it would’ve done if we’d had to drop the gearbox!

We were so glad to be rolling again :)! HUGE thank you to everyone who helped us get back on the road!