Woke up to say goodbye to Chiara and Marck before they headed to work… We’re already looking forward to being back in Tornaco in May for Bugaloo! (www.bugaloo.it)

Spent the day driving south towards the coast, taking the 211 then the 35 before going for a little detour on a few narrow steep roads! Arrived in Genova where we met the dreaded rush hour traffic – even worse with scooters weaving in and out!

Finally out of the city, we made our way in the dark along the coast road trying to eye up a spot for the evening. Luckily it wasn’t too long before we were parked up for free just outside Celle Liguire.

Woke up to the sound of the sea and poked our heads out the van to witness a beautiful sunrise. We didn’t realise how much we had missed the coast (the last time we were by the sea was all the way back when we were in Denmark)! 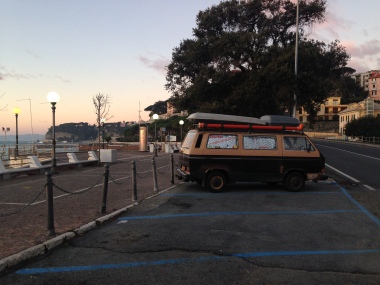 After a posh coffee (cheers for our Moka Chiara and Marck!) and some biscuits for breakfast we got back on the SR1 and carried on further along the coast. Awesome road! The weather was beautiful – the warmest we’d been in ages! Stopped in Andora where we had a walk along the beach… no jumpers needed today!

We then visited Cervo and it’s beautiful medieval town – narrow cobbled pathways decorated with bright Bougainvillea and quirky old buildings round every corner. We found our way to the baroque St.John the baptist church before enjoying the sun for a little bit longer with a view of the sea and the rest of the coastline. 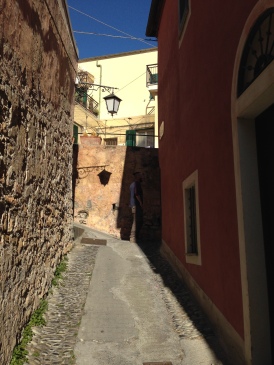 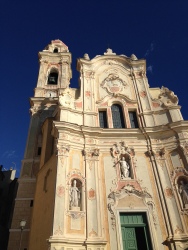 Visited a supermarket with plans to buy some cheese and salami, find a spot on the beach and have a picnic… however that plan soon went wrong when we pulled out of the car park and the bus decided it’d had enough and stopped on the road…

Luckily for us it wasn’t a particularly busy road and a few parking spaces were right next to us! I steered and Tris pushed and we finally got the van in a parking space, safely out of the way. Got the engine cover off and began looking at the engine, not really knowing what had happened.The fuel pump seemed to be drawing some fuel, the filter looked OK and due to the fact the van wouldn’t start again, we came to the conclusion it must be something electrical. Over lunch we gave Marck and Glenn a call for some guidance (cheers guys!) and Tris gave the distributor cap a clean. Low and behold Charlie was up and running again!

We may have missed out on having lunch at the beach but we made up for it by finding another free stop next to the sea! We were amongst a few other motorhomes who were in awe of the van’s evergrowing sticker collection!

Set an alarm in order to watch the sun come up again – looked like we were in for another warm, sunny day! And if the sunrise wasn’t good enough… it was followed by waffles and plenty of Nutella!

Took a walk down to the beach and around the nearby village whilst crossing our fingers that the van would start OK today! Luckily Charlie started and we were on our way towards France once more. Stopped at a supermarket to stock up on a few last Italian goodies before the van gave up again… This time on a one way road but we were able to move to one side again (cheers to whoever was looking over us!). So once again it was off with the bed and our storage draw to access the engine…Tris gave the ‘earth’ a clean and within 15 minutes it was running again.  However, we were now convinced it was more of a serious problem rather than a case of some dirty electrics…

With the fear of it happening again in the back of our minds, once we’d crossed the border into France, we pulled over somewhere in Menton and contacted Marck to ask whether he could recommend anyone/anywhere for us to go and have the problem investigated – we were stumped as to what it could be!

After a wander round the port we were put into contact with Ivan- an Italian/French VW mechanic who also had a workshop! Using google translate we messaged one another and he came out in his T4 to find us! A quick observation in the engine bay and after firing a few questions at us, Ivan predicted that the issue was actually fuel related! It was too late in the day to take it up to the workshop so instead Ivan kindly invited us back for dinner where we were introduced to his lovely family!

Van started first time this morning and managed the 800m ascent up into the mountains to Ivan’s workshop! Parked the van up for 10 minutes; admired Ivan’s workshop and the renovations going on inside, and then tried to drive it to simulate what had happened previously… as predicted the van cut out again and Ivan could see for himself exactly what was going on.

Several tests were done with our fuel pump which confirmed it wasn’t working properly and it had also led to our fuel filter being blocked. We couldn’t believe our luck when Ivan’s friend popped by and had a brand new fuel pump sitting there!

We went back to Ivan’s for some lunch and to pick up a new filter and fuel line. We admired his attention to detail and his passion for Volkswagens! Back at the workshop early afternoon, the new fuel pump was fitted and Ivan spotted what could have potentially become a serious problem – the underside of our fuel hose within the engine bay had become very worn, it could’ve split at any point! Within an hour or so however, Ivan had kitted Charlie out with a new fuel line and new hose in the engine bay so the risk of fire was seriously reduced.

Gave the van a trial run and the new fuel pump seemed to have done the trick! Ivan invited us back for dinner again as the sun had already set, so we followed him back down the mountain back into Menton and decided to get a move on in the morning. The evening was spent enjoying a great dinner with his family and watching a french music quiz with a few G+T’s and rum&cokes!

After breakfast and a photo together, we said our farewells to Ivan and his family – we will be eternally grateful for what they done for us, from fixing our van, cooking us dinner and letting us have a much-needed shower!

We drove into Monaco with hopes of finding a sticker for the van, however it being a lovely sunny Saturday meant it was pretty busy and a nightmare to park! Instead we took the road out of Monaco and headed towards Nice along the cliffs, towering above the sea with a great view of the french coastline. 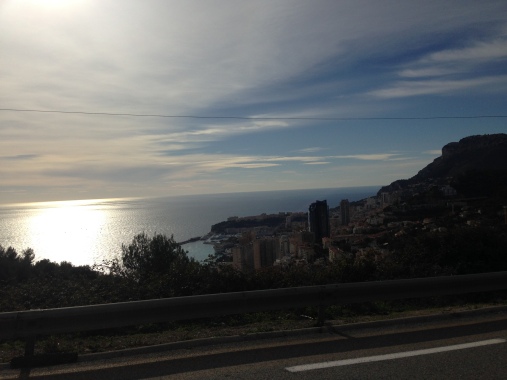 Unfortuntately we had to say goodbye to the sunny south coast and make our way inland, however, the N202 road was still pretty awesome! Mountains, lakes and we even passed under a rainbow! 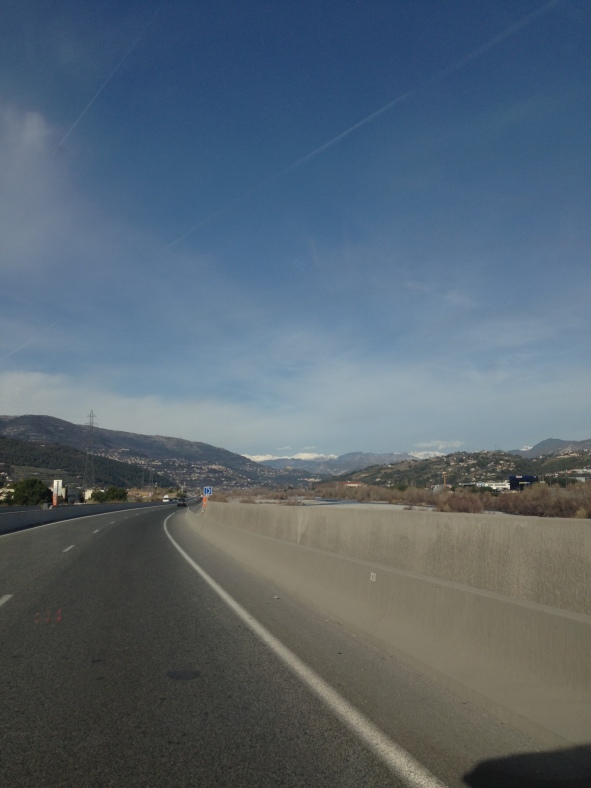 We stopped in Entrecaux for lunch and got talking to another traveller in a ford transit (who we’d overtaken about 30 mins beforehand!). His name was Tom who actually lived in Australia and was travelling Europe. He even owned 2 T2’s back in Australia so he had an interest in our van! He carried on his way and we found a better place to park with views of the medieval village and citadel.

As we continued to weave round the mountains the sky was getting darker and darker… Turned one corner and all of a sudden there was snow! Crazy to think we were in a t shirt just that morning at the coast! 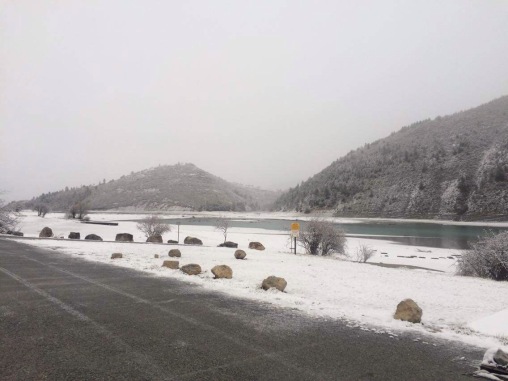 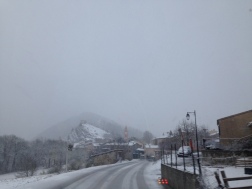 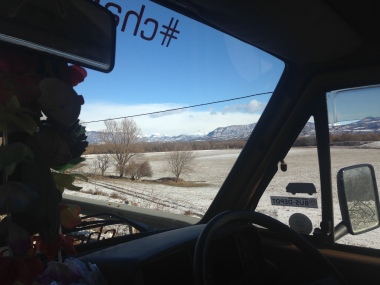 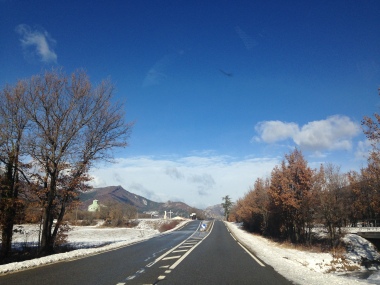 The snow got worse as we carried on driving, we doubt France was expecting it as no grit had been laid down, it was an interesting drive to say the least! Tris done really well even when the van decided it was going to slide a bit…! Eventually the snow calmed down and turned into a downpour as we pushed on. We parked up around 7ish in Chateau Arnoux, where it continued to rain all evening however we forgot about it and enjoyed some wine and cheese for dinner!

Still raining, we decided to eat some more miles up and spent most of the day on the 1075. The amount of rain had caused several rivers to burst their banks and at one point we had to drive through a fair bit of water to continue! 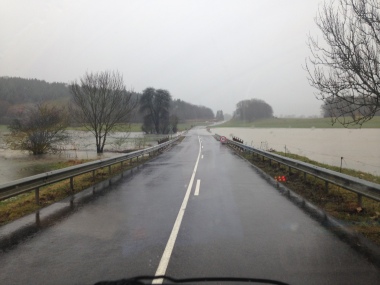 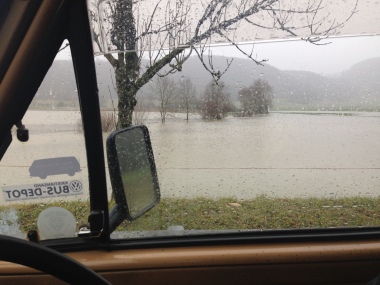 Early evening we parked up in a small village just outside Lons-le-Saunier where once again it rained all evening… Couldn’t believe we were already in our last week of our epic six month trip away!